I reviewed Debt Free U for the Education Cents blog for my job as part of the Financial Literacy Team at CollegeInvest. Not that you could tell from looking at this site, but I have actually been writing about personal finance and financial literacy, I just haven’t been doing it here.

So, without further ado, my review of Debt Free U by Zac Bissonnette. (Click here to see the post in its original setting.) 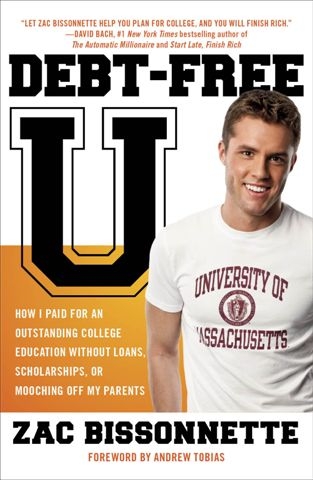 Title: Debt Free U: How I Paid for an Outstanding College Education without Loans, Scholarships, or Mooching Off My Parents

Summary: Many families feel that the only way they can send their student to a good school and set them up for a bright future, is for both parent(s) and student to take out heaps of loans, going into debt for years after the college experience is over. Zac Bissonnette wrote Debt Free U to disprove this idea and to address what he calls the "Nine Myths of College." While not all of Bissonnette’s ideas will work for all students, overall he is a proponent of being realistic about college costs, students taking responsibility for their college financing, and staying away from student loans.

I wish Bissonnette had written and published this book in 2001, when I was graduating from high school, instead of in 2010. If he had, I would likely have made very different decisions about where to go to school, how to pay for my education, and even the major I chose.

Is this book really that powerful? For me, it might have been. Take it from someone who is now one of the statistics that Bissonnette cites. (That’d be me.) I believed every one of Bissonnette’s myths and allowed those beliefs to cloud my judgment about higher education. If someone had put this book (had it existed) in my or my parents’ hands when I was eighteen-years old, things might have been very different.

If you’re a high school student looking to get a leg up on this whole "higher education decision process" or a parent planning on sending your son or daughter to college, I think it’s worth checking out Debt Free U and considering Bissonnette’s myths and advice. Again, it might not all apply all of the time, but there are some great things to consider here.

The Key Take-Aways from Debt Free U

Not thinking student debt was a big deal
Bissonnette discusses this in Chapter 2, entitled "Student Loans and Stagnant Wages." The crux of his argument is that it’s foolish to take out loans based on a predicted future wage. He says that doing so can set a graduate up to be locked into the best paying job he can get after graduation, whether or not he likes the work. And that doesn’t even take into consideration the risk of borrowing more than you can afford to pay back and defaulting on the loans, which is one of the most financially devastating things that can happen to a person.i

My dad warned me that attending the small, private Liberal Arts College of my dreams would mean tens of thousands of dollars in student debt. He was able to help me with about half of the cost of tuition (which, in retrospect, put a financial burden on him that I can’t really repay). I would need to come up with the rest on my own. In my infinite eighteen-year old "wisdom" I laughed this off, stating that I’d "figure it out."

I haven’t defaulted on any of my student loans (thankfully), but my husband (then-boyfriend) almost did. Just thinking about it gives me chills, knowing what I know now. And, even though I haven’t ever defaulted, I did have to defer payments on my loans for a while about three years after graduation. The job market was stagnant, much like it is now, and I was working two jobs at minimum wage, and barely made enough to pay my regular bills. During that time, I couldn’t even pay interest on my student loans, which means that I now owe more on a few of my loans than I had originally borrowed.

This is a cautionary tale that affects more than a few college graduates. It may not affect you, but keep it in mind. In the end, how much money you make after graduation depends on a number of factors, including your field of study, and what internship and other opportunities you took advantage of while in college.

Putting stock in all the hype about my “dream” college(s)

My Alma Mater isn’t Harvard or Princeton or Yale, but it was listed by some college ranking agency as a member of the "Ivy League of the Midwest." Its rankings were very favorable in the US News and World Report, and in general it was billed as a very good, "competitive" school—as were many of the schools I considered.

With the benefit of ten years of hindsight, these rankings don’t seem as important as they did then.

That is basically the argument Bissonnette makes in Chapter 3, "Does It Really Matter Where You Go To College?" He spends the majority of that chapter taking a critical look at the US News and World Report rankings, as well as the ideas of "fit" and "prestige." For me, the most thought-provoking part of Chapter 3 was a study he cites: "Children Smart Enough to Get into Elite Colleges May Not Need to Bother."ii What an interesting thought.

My college, which I picked for its small size, was too small for me

In Chapter 5, Bissonnette discusses why he thinks large public universities are better than private colleges. Certainly, different types of schools are going to be better for different types of students and there are some fantastic small schools out there. However, Bissonnette makes the claim that it’s easier to make a large school small than it is to make a small school large. For me personally, this proved true.

I grew up in Columbus, Ohio, and applied to the Ohio State University (OSU) as my "back-up" school. I had no intention of going there because I thought it was too big. Having gone to a small magnate-style high school, I worried about falling through the cracks at a larger school like OSU. The real story was that my small, Liberal Arts College ended up being too small for me.

Despite its size, OSU, like many public institutions, has many smaller colleges within the university, where the class sizes are comparable to those at my private college. But the reason I say my college was too small is because it didn’t offer the programs that I really wanted after finishing my freshman year.

Example 1: I loved physics and chemistry in high school, and had thought about studying engineering, but my college didn’t have an engineering program. I should have done more research before picking my college, but at the time engineering was more of a vague "maybe" than a solid dream, and the school had a physics and chemistry department, so what did I have to lose?
Example 2: I love languages and after my freshman year I thought it might be interesting to study linguistics, but my college didn’t have a linguistics program.
Example 3: My eventual major, Philosophy, had a department of two teachers, only one of whom was tenured. My senior year, the tenured professor went on sabbatical, leaving only a tenure-track professor who’d been there for two years, and an interim professor, both of whom taught the same disciplines, which meant there was significant overlap in the types of classes available, especially when it came to courses required for my major. My senior year was my least academically rigorous year for this reason, and one that I often wish I could go back and do-over. Not an ideal situation when the sticker price on my education was $36,000 a year.

If I had gone to a larger, public institution like OSU, I could have explored more fully my interests in Engineering, or Linguistics, or Economics, without having to face the idea of changing schools and leaving all of my new friends (and my boyfriend) to do so.

Don’t get me wrong, overall I really liked my small college, but there’s also something to be said for the benefits of largest colleges. At the end of the day, the size of the college was probably not as important as I originally thought.

The reality of my situation is that Columbus has a wonderful community college scene, and OSU definitely makes transitioning into their institution easy for graduates of the local community colleges. I know, because several of my friends from high school did just that.

I was dead-set against the idea at eighteen, but if I knew then what I know now, that’s the route I would have taken.

There’s a lot to think about when you’re choosing your path for education after high school – especially when considering where you’ll go and how you’ll pay for it. Spending time researching the options and having A realistic conversation about college, including the cost, is a must.

In this book, Bissonnette argues that it’s possible to get a world-class education while accruing little or no student debt, and he believes that should be the goal of every individual who’s planning to pursue higher education. In reality, it’s probably not the only goal, but it’s certainly a good one from a personal finance perspective!

Despite Bissonnette’s claims, borrowing for college is a financial reality for many students. However, he offers good suggestions for ways to avoid unmanageable debt by putting in extra effort to select a school that’s a good fit, price-wise, and working hard to manage your money throughout school to keep costs and borrowing levels low.

Check out the Education Cents Paying for College course for more information on this complex topic.